Adam Lambert and boyfriend Sauli Koskinen were having public display of affection at the launch of J. Molinari, which was sponsored by BluCigs and Hpnotiq harmonie. 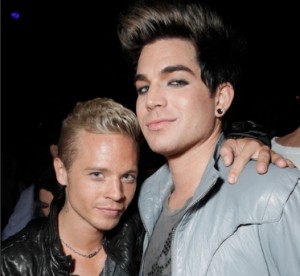 The event was not only the launching of jewelry designer Markus Molinari’s new line of jewels but it was also the designer’s birthday. Adam and his beau sipped on Hpnotiq Harmonie “Only Gurl” drinks and ate Crumbs cupcakes. Meanwhile, the big event was hosted by John Terzian of The h.wood Group.