Angelina Jolie and Brad Pitt attend the 17th Sarajevo Film Festival on July 30 at the Sarajevo National Theatre in Bosnia. 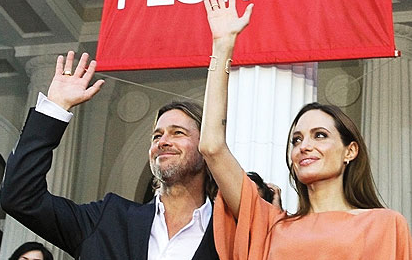 The 36-year-old actress, who was sporting a coral Elie Saab gown for the closing ceremony, received the Honorary Heart of Sarajevo award. Meanwhile, Angelina and Brad reportedly set up home in Richmond- on-Thames as they will stay in a lavish £10million home owned by the widow of a fashion tycoon.