Angelina Jolie and Brad Pitt were spotted while heading out for dinner at Tetou restaurant on May 15 in Golfe Juan, France. 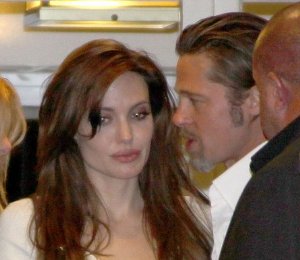 The actress, who wore a white double face sheath from the Michael Kors Spring 2011 collection, is promoting her new film Kung Fu Panda while she and her partner stayed in town for 2011 Cannes Film Festival. Meanwhile, Brad will premiere his new film The Tree of Life at the festival on May 16.