Angelina Jolie goes full frontal in “Beowulf”. In the film, the actress looks voluptuous once again. 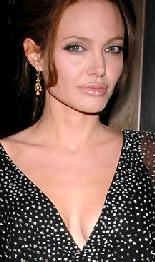 The “Good Shepherd” actress took the role of seductive water demon in the epic film. She will appear in the animated movie wearing just a long braid, covered in gold paint and with hooves instead of feet.

In the recent trailer, it has a shot of the actress from behind, a couple of her from the side and one of her nude from the belly-button up.

Ryan Stewart revealed, “Speaking of Angelina, someone really needs to talk to her about the accents, because the voice she’s sporting in this film seems like Dracula again, which is exactly what we heard in Alexander and even a bit in A Mighty Heart.”

He added, “When I spoke with her at the press day for Heart she talked about working with a voice coach and how some accents were more challenging than others, and I have no doubt she’s talented enough to broaden her accent range, but she probably needs someone to tell her that it’s necessary. We’ve heard Transylvanian Jolie — let’s hear something else.”

You could view the trailer here