Beyonce Knowles wants to prove that she wasn’t having a fake baby bump when she slipped into a maternity top. 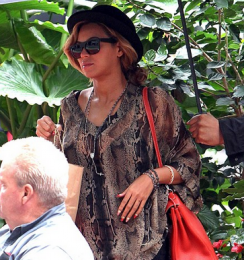 The singer was spotted while sporting a flowing snakeskin blouse which she teamed with black jeans, hat and vertiginous buckled boot heels in New York. The public sighting happened just days after claims that she wore a fake bump for a television appearance and a surrogate mother carries her baby.