Brad Pitt and Angelina Jolie stepped out with the brood in London, England on August 6. 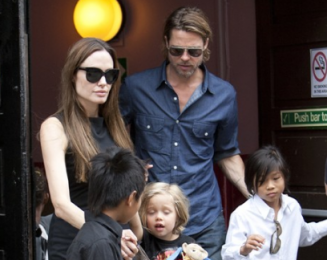 The “Mr and Mrs Smith” couple escorted Maddox, Pax, Zahara and Shiloh to the Victoria Theatre to check out a stage production of “Wicked” – with the outing coming a day after Maddox’s 10th birthday. It was reported that the couple stayed in London while Brad continues to film his upcoming film.