Brad Pitt became a guest on “The Ellen DeGeneres Show,” which will air on September 22. 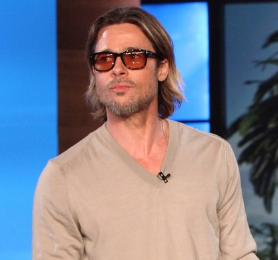 The 47-year-old actor talked with host Ellen about his partner Angelina Jolie. He revealed that they find their time and carve out “Mommy, Daddy time,” which is called a hotel. On marriage equality, Brad insisted that he would not be getting married until everyone had the right to get married. It won’t make them great until that is reversed.