Brad Pitt took his kids to the screening of Mr. Popper’s Penguins on August 29 at the Odeon Theater in London, England. 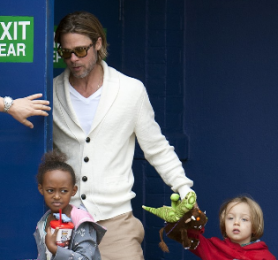 The “Babel” star held hands with 3-year-old twins Knox and Vivienne while older kids Zahara, Pax, and Shiloh led the way. Brad is in the UK to film his latest movie, World War Z, which is a post-apocalyptic zombie film.