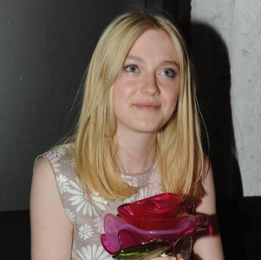 In the print ads, the 17-year-old actress was sporting a flesh-colored polka dot dress while holding a flower-topped perfume between her legs. But her photographs were deemed as sexually provocative and irresponsible by the U.K.’s self-regulatory Advertising Standards Authority. The images were also concluded to cause serious offense since Dakota is still a minor.