An alleged People magazine cover, which indicated that Taylor’s confession of being gay, had surfaced online. 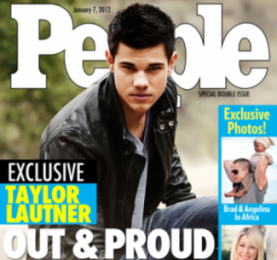 The image of supposed January 7, 2012 issue with the catchy lines: “Out and Proud: Tired of rumors, Twilight star opens up about his decision to finally come out.” Taylor was quoted as saying that he’s more liberated and happier than he has ever been. But the magazine representative confirmed that it is absolutely fake even though it is being circulated everywhere via Twitter and other social media on Monday.