Emma Watson, young actress, has secret plans to drop her good-girl image and bare all on the stage – just like her Harry Potter co-star Daniel Radcliffe. 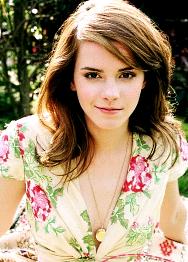 The 17-year-old actress admits she giggled her way through Daniel Radcliffe’s n@ked scenes in London stage show “Equus”, but she admires the actor’s courage.

She revealed, “I’d like to think I would (do that). Not that I want to get n@ked, but I hope that something like that will come along. That’s the plan anyway”.