The young stars of “Harry Potter” films have confessed to drinking and smoking. 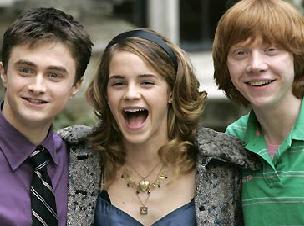 Daniel Radcliffe, Rupert Grint and Emma Watson, who play young wizards, say they have experimented just like all other teenagers.

Emma Watson revealed, “You are careful not to do it in the public eye. You have your first cigarette or first glass of alcohol in a safe environment with your close friends – or you could be foolish and choose to do it in a London nightclub.”

Rupert Grint added, “Because we are quite busy we do miss out, but we still have those kinds of experiences like getting drunk for the first time.”

Despite enjoying going out, Daniel Radcliffe revealed he always puts his work first. He said, “What I enjoy most is the acting and the work, but it doesn’t stop us from having a party once in a while. Parties are fine and fun.”

In the latest film, “Harry Potter And The Order Of The Phoenix,” Daniel has his first on-screen kiss with Katie Leung, who plays fellow Hogwarts student Cho Chang. But he admits he wasn’t nervous as nothing can touch the nerve-wracking experience of appearing [email protected] on stage, which he did in West End hit “Equus”

He added, “Once you’ve been on stage [email protected] in front of 1,000 people you really feel you can do most anything without inhibition. The kissing was fun but less sexy than I imagined. We probably got it right on the 30th take!”