Jennifer Aniston and Justin Theroux were spotted while going to a doctor’s appointment in Beverly Hills, CA on August 31. 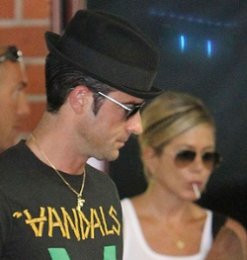 The actress was sucking a lollipop when she headed to her car after her doctor’s appointment and her actor beau followed closely. Meanwhile, Jennifer has a new TV effort “Project Five,” which released its trailer with the Lifetime backed feature set to air on October 10th.