Jessica Biel was spotted flaunting her pregnant belly when she wore cut-off t-shirt and pink sweatpants in NYC on Monday. 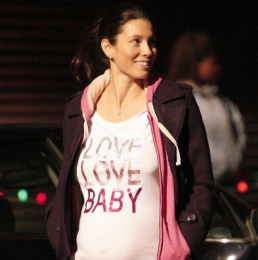 The 29-year-old actress’ bare bump is fake, which was worn on set while she was filming New Year’s Eve with Seth Meyers, who drove her around in a petty cab in one scene. Jessica is among the A-list ensemble cast of the romantic comedy from the producers of Valentine’s Day. New Year’s Eve debuts in theaters Dec. 9.