A shocked John Travolta was once asked to dance at a party by Sean Connery – and accepted because he couldn’t turn down the James Bond legend. 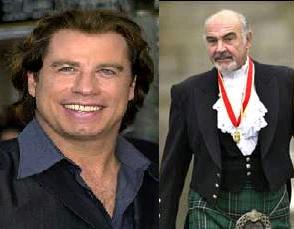 Following his breakout role in 1977’s Saturday Night Fever, the actor admits he was regularly asked to dance, but even he was taken aback when Sean Connery popped the question at a posh bash in the 1980s.

He revealed, “I was asked to dance by Sean Connery. We were at a party for Frank Sinatra and we were on our way out, my wife and I were leaving. And he (Connery) said, ‘John, where you going?’ And I said, ‘I’ve got to go home, I’m filming tomorrow.’ And he said, ‘Before you dance with me?’ And I said, ‘Alright.’ Who’s going to turn down Bond? So we ended up dancing together. The whole party stopped… I just couldn’t believe I was dancing with 007. It was a good feeling, dancing with a big icon like that was awesome.”