Justin Bieber performed the Beatles’ hit “Let It Be” on a stage in the middle of Times Square on New Year’s Eve in New York City. 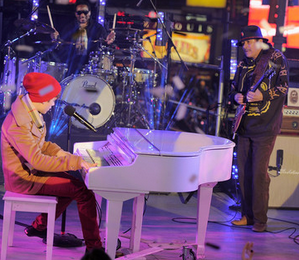 The “Baby” hitmaker was accompanied by legendary guitarist Carlos Santana for the performance, which aired on Dick Clark’s Rockin’ New Year’s Eve with Ryan Seacrest. Justin, who played the piano, greeted the New York audience and revealed that he was so happy to be ringing the New Year with them.