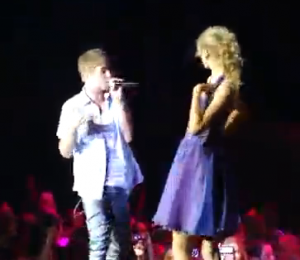 The country crooner asked the audience who wants to see Justin, who suddenly appeared onstage. Then the pair sang a duet of the song “Baby.” The performance happened after Justin tweeted to thank Taylor for singing “Baby” at her concert in TO and made hint of coming by on her show.