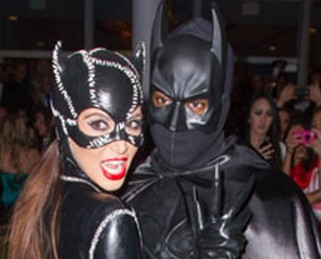 The socialite is channeling Cat woman and the rapper is gearing to be the Dark Knight himself. Kim is very comfortable in doing her feline poses when she arrives at LIV nightclub party. She also shows off her clawed hands and sharp cat teeth as poses for photographs in PVC costume. Kanye hugs and makes up to paparazzi, who he previously smacked in Miami. Other celebrities, who attend the bash, include Kourtney and her boyfriend Scott Disick. Meanwhile, Kim comes back to shoot “Kourtney and Kim Take Miami” after spending a romantic break to Italy with Kanye for her 32nd birthday celebration. They enjoyed sightseeing while spending holiday in Venice, Rome and Florence.