Mary Louise Parker, star of television series “Weeds”, posed nude and wears nothing but a snake. 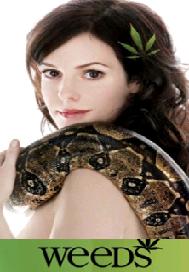 Showtime is pulling out all the stops in an effort to promote the return of “Weeds” and David Duchovny’s new show “Californication” this August with breathtaking “Weeds” promo.