Jessica Alba, who is newly proud celebrity mother, has exclusively poses her baby daughter Honor Marie as they graced the OK magazine cover. 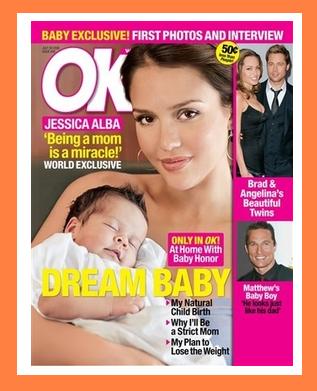 The birth of their daughter Honor Marie Warren on June 7 was anything but chaotic, maybe because preparing for the birth of the first child can be nerve-wracking for any new mom.

In her exclusive interview and photo shoot, Jessica Alba revealed, “I didn’t scream. It was really Zen.”
Cash Warren talked about the actress’ quiet strength during labor, saying, “She didn’t make a sound. It was amazing.”

The actress revealed, “It hasn’t totally sunk in. She dreams, she smiles, and coos and does all these things, but she hasn’t seen enough of the world yet to understand any of that stuff. So I still feel like she’s connected to the other world, or something. There’s no other way to explain it. It’s a miracle.”

“The Love Guru” actress talked about her natural birth, saying, “The labor was more like meditation. I did yoga breathing. I was focused.”

She revealed, “I started working out last Thursday, but for 20 minutes. I do cardio on my own. I’m doing it slow. Now I’m starting to eat more healthy. Because after working out, having fried chicken and mashed potatoes is a little counteractive.”

On the remarks of the baby Honor’s appearance, Cash Warren proudly revealed, “She looks like a girl version of me. She has my nose, my eyebrows and my…”

Jessica Alba quickly added, “Forehead and dimples. She has my mouth when I was a baby. And my ears.”

Cash Warren also reconsiders, “Maybe Honor is a mixture. I want her to look like me, because a daughter looking like Jessica, I’d kill myself!”

Why they choose the name Honor Marie? One reason was that the 27-year-old actress felt her own was pretty bland, saying: “I was always irritated that my name was Jessica.”

Who will be the disciplinarian? The actress replied, “I think we’re pretty even. We’re good at communicating and bouncing things off each other. We’ll stick to our guns, even when she gives us pout face!” Her husband, who tries to be the good cop, joked: “I’ll hide. Babe, you punish her!”