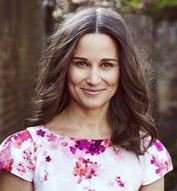 The younger sister of Duchess Kate describes the designing process as fun and creative. The dress was worth £295 and the scarf was worth £95. She also promoted the fesigns when she appeared at Wimbledon while wearing the tea dress. Her creation was a sold out item but the fans have another chance to buy it after the dress becomes a part of a charity auction for the British Heart Foundation.