Prince Harry is happy to learn that he can keep the stormtrooper outfit he used when he secretly shot a scene for Star Wars VIII at Pinewood. 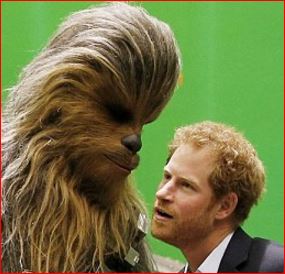 The prince won’t be seen to play around wearing it. It is reported that the stormtrooper suit will worth £10,000 at auction. The popular suit will be a part of the Royal Collection, to be displayed in a palace or loaned to a museum. Meanwhile, Prince Harry is also pictured with Chewbaca during his visit to Pinewood studios.