Prince Harry talks to other guests, which include high-ranking soldiers and army veterans at The Guildhall on April 7 in London, England. 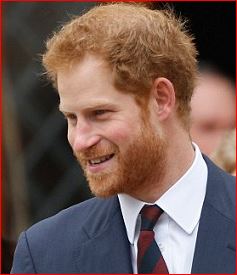 The 31-year-old royal meets with veterans at the event, which benefits ABF The Soldiers’ Charity. Meanwhile, Prince Harry was smartly dressed in a navy suit, white shirt and striped burgundy tie for the charity event, which costs £95 a head and includes ‘unlimited’ beer and wine.