A violent drunk verbally attacked Prince Harry during a night out with his girlfriend. Prince Harry and Chelsy Davy were at London’s Azteca Latin Lounge when an inebriated man launched a barrage of abuse at Prince Harry on Wednesday night. 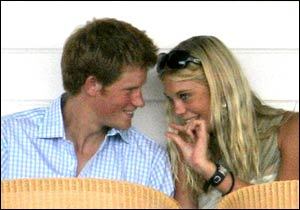 Witnesses said that the drunk man shouted: “I f***ing hate the royal family. Who do you think you are in here? Why don’t you p**s off to Iraq and get yourself killed, you ginger t**t.”

The protection officers of the prince stepped in and removed the drunken thug from the Chelsea cocktail bar.

A source revealed, “This guy came out of nowhere and just started hurling abuse at Prince Harry.”

A source added, “There didn’t seem to be any reason for it. You could see the guy had clearly had a lot to drink. Harry’s reaction was one of shock. He stood facing the guy – and then the chap lunged at Harry as if he was trying to punch him. That was when his bodyguards intervened.

The source also claimed, “It could have gotten ugly but Harry kept his temper and let it sort itself out.”

A spokesman for Clarence House revealed, “An individual lunged at Prince Harry but there was no physical contact. There was no scuffle.”

Prince Harry, 22, and his girlfriend Chelsy, 21, were enjoying the time they have left together before Army officer Harry is deployed to fight in Iraq with his Blues and Royals regiment.