Prince William and Duchess Kate waved and smiled broadly to the waiting cameras while holding their son on the steps of the private Lindo Wing at St Mary’s Hospital in London. 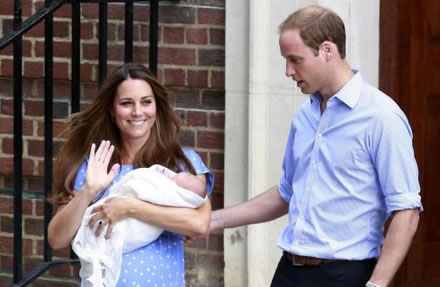 The couple left St Mary’s carefully cradling their baby, 26 hours after he was delivered just like Prince William’s parents did 31 years ago. The Duchess of Cambridge reveals that it has been very emotional since any parent will know what this feeling is like. Prince William thinks the baby is a big boy, quite heavy and has a good pair of lungs. He also thinks that their son got his wife’s looks. When their son got older, the 31-year-old prince will remind him of his tardiness since he was overdue. Meanwhile, Duchess Kate is wearing a lilac purple dress, with her long hair falling in waves around her face while Prince William is sporting a blue open neck shirt rolled up to his elbows with black trousers.