Ricky Gervais jokingly escapes the anger Justin Bieber’s fan when he poked fun at the singer and suggested that he couldn’t have fathered a child. 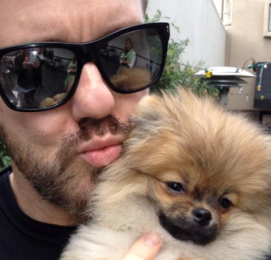 The Golden Globes host is getting out of Los Angeles and he is heading to New York on Monday. Is Ricky safe from Justin’s East Coast fan base? It appeared that he got enough protection from his adorable dog.