Robert Pattinson was spotted leaving the building in a very bad mood after a meeting at ICM Agency in LA on Monday. 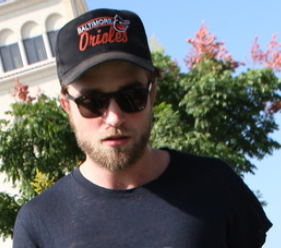 A photographer kept his distance while taking pictures of the British actor, who clenched his fists and almost threw a punch at the camera. But his friend told him to stop and calmed him down. Fortunately, Robert reportedly cooled off, unclenched his fists, and peacefully walked away with his friend.