Salma Hayek was named by President Nicolas Sarkozy to receive the Légion d’Honneur on Sunday. 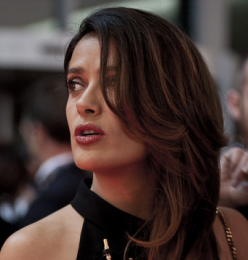 The “Puss In Boots” star will enter the five-tiered honor academy with the grade of Chevalier or “Knight.” She will have formal induction, which includes Presidential medal pinning, at the Élysées Palace within the next two months. Salma’s father-in-law was previously promoted in the same list to the Legion’s exalted rank of Grand Officer.