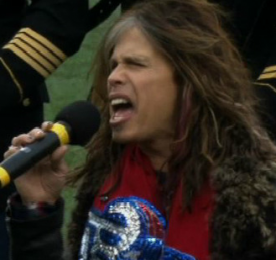 The “American Idol” judge, who wore shining New England Patriots scarf, made his rock version of “The Star-Spangled Banner” for the game between the New England Patriots and Baltimore Ravens. His version creates criticisms like “he butcher the song,” “he made it more obscene,” etc.