Adam Lambert was spotted while having an interview for television show Extra at the Grove on February 9 in Hollywood. 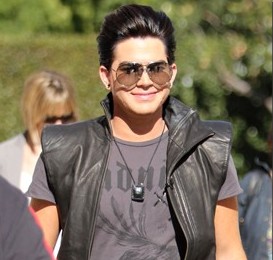 The “Time For Miracles” singer previously joined by his pal Sauli Koskinen for a night on the town at the Grand Havana Room last week.

Adam, who sparked some speculation that he and Sauli were a couple, cleared the rumors and thought that the media is literally inventing his social life as they see fit.