The top four finishers are saved for the second half — after the intermission, which renders this more a theatrical revue than a traditional concert. Allison Iraheta hits a snag right away. She sings Pink’s “So What,” with a wind machine to blow on her hair. All that means is that she can’t move. 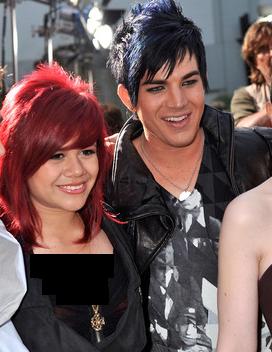 So it isn’t until she is cut loose for Janis Joplin’s “Cry Baby” that it happens. That you realize that she’s actually very, very good, and suddenly does not belong here, or perhaps “here” does not belong with her. For all the jokes and the Ford Fusion commercials, she has innate artistry, and unlike the first-half lineup, effortlessly owns the stage and the crowd.

Third-place Danny Gokey is the conspicuous weak point of the second act. His rendition of Santana’s “Maria Maria” brings an embarrassing dance with his microphone stand. And while knowing the kind of performer you are is good, when two of your four songs are covers of the same artist, you elevate that artist to your personal Elvis. This means Danny Gokey’s personal Elvis is Rascal Flatts.

But then. Oh, then. The girls — the screamers — have been waiting for Adam Lambert all night, shrieking reflexively at every glimpse of his picture during the T-shirt promotions on the big video screen. He does not disappoint them.

Since “Idol,” Adam Lambert has released the hounds. His theater-inspired style, where every song is sung by a different character, has been amplified across every dimension. Sure, on television, he sang “I’ll give you every inch of my love” when he covered Led Zeppelin’s “Whole Lotta Love,” but live, he accompanies it with a hip twitch and an illustrative hand slap, in case you are wondering where on a human being you might locate inches of love. What was once dirty subtext is now dirty text.

It’s unambiguously delightful. Lambert tries on so many different personalities that it would seem positively unfaithful to enjoy all of them — and there is still too much screaming and affectation to make everything work — but there is energy to burn, with leftover energy to power motorcycles and blast statues out of blocks of raw marble. His act is sometimes profoundly silly, but then, so was David Bowie’s. (In case the comparison is not clear enough for you, he closes with a Bowie medley.)

And finally: Kris Allen. Coming after a presentation as spectacular (in “spectacle” sense) as Lambert’s, it would be easy for the actual winner to fall pancake-flat, but he doesn’t. Instead, the grandiosity of the Lambert set makes the relative intimacy of the Allen set work better. They’re so different that they don’t suffer from comparisons. No, Kris Allen can’t sing “Fashion” while stroking his own face with polished nails, but Adam Lambert couldn’t sit at a piano and pull off Allen’s affecting “Ain’t No Sunshine.”

Kris Allen, for all that he seems like a safe, slow-pitch alternative to the Adam Lambert knuckleball, is a solid musician and an amiable, charismatic performer. He moves easily on stage, with a sort of coffeehouse friendliness that doesn’t shake rafters, but has its own appealing warmth. Guys like this may not get on the cover of Rolling Stone as easily as Adam Lambert, but guys like this sell records.

When you walk into “American Idols Live,” you have to be fair. You are not there to see out-of-the-box, edge-of-your-seat, artistic performances. That doesn’t mean these performers will never do those things, but it won’t be here, on a concert tour made up entirely of covers, mostly of radio hits that are somewhere between one and five years old.

In the second half, when you see Allison Iraheta and Adam Lambert and Kris Allen, it’s hard not to think that while “Idol” can be a parade of grotesques, it manages at times to bubble people up through the ranks who can, against all odds, put on a pretty good show.