Angelina Jolie and Brad Pitt were spotted while leaving 45 Park Lane hotel after spending the night on September 18 in London, England. 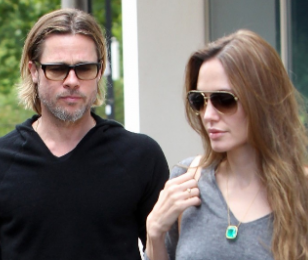 The 36-year-old actress was sporting a loose gray v neck jumper with a long gray skirt with Robert Procop necklace while Brad was dressed in black v neck jumper and black trousers. They avoided the main entrance to make a discreet exit as they stepped out for Sunday lunch. Meanwhile, Brad, who will hit the big screen in Moneyball on September 23, recently took the covers of Entertainment Weekly and Parade magazine.