Angelina Jolie takes her daughters Shiloh, 3, and Zahara, 4, to a dance class called “The Princess Series” on Monday in Studio City, California. 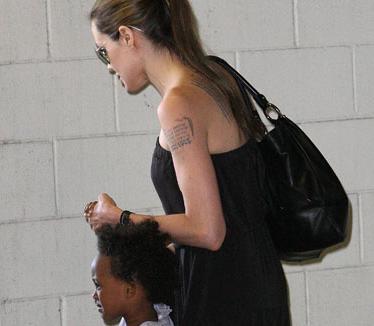 Holding each of her little girls’ hands, the “Wanted” actress walked back to her car in a parking garage below the dance studio before heading off on her way. It seems Zahara enjoys sticking her tongue out at photographers.

Meanwhile, Angelina Jolie is reportedly set to star in an advert with David Beckham.

The Changeling star — who raises six children with partner Brad Pitt – has signed a deal with Emporio Armani and the Italian fashion house is keen for her to team up with the hunky soccer star, who is married to former Spice Girl Victoria Beckham.

“When you have David Beckham and Angelina Jolie signed up to your fashion house it’s a no-brainer to link them up,” a source revealed.

“They appeal to a diverse audience and a collaboration would create so much publicity it would push Armani head and shoulders above their rivals. There are a few contract issues to be addressed but marketing experts are being tasked with coming up with clever ideas for a print campaign.

“The two are exceptionally beautiful on camera but both are in committed relationships so the advert would have to be sexy without offending their partners.”