Angelina Jolie, who is the new face of Louis Vuitton, is featured on her first ad for the company’s “Core Values” campaign. 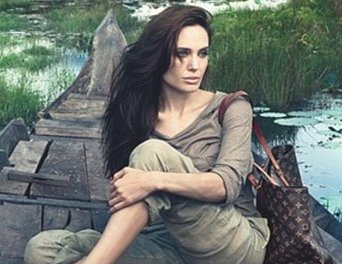 The actress was sporting her own clothes, no makeup and her own years-old monogrammed Alto bag while sitting on a boat in Cambodia’s Siem Reap province. Her advertisement will break in the International Herald Tribune on Wednesday and it will be in different publications for about 18 months. Angelina will also donated the portion of her campaign fees to charity.