Angelina Jolie, who recently denied split rumors, is recently resumed filming a dangerous stunt on the set of thriller “Wanted”. 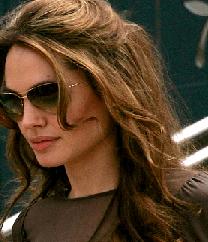 For the sequence, the actress perches on her back on the bonnet of a red Dodge Viper sports car, all the while toting a sawn-off shotgun.

The 32-year-old actress plays The Fox, who is the second-in-command of a gang of murderous assassins, in this forthcoming comic book adaptation.