Ashley Tisdale, who was previously happy as she got a new car, is graduating from her High School Musical days and she is the latest cover girl for Cosmopolitan April 2009. 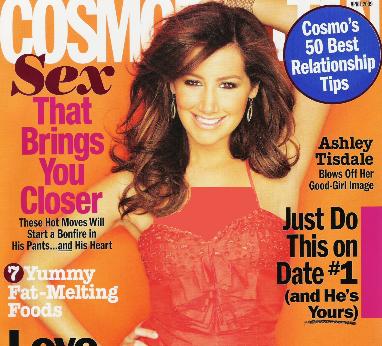 The 23-year-old starlet talked about her upcoming album, boyfriend Jared Murillo and what’s next for her.

On breaking out of the teen scene: “People see me as cute, but I’m so much more than that. I’m 23 and I’m growing up, I can’t be young forever.”

On her upcoming album, Guilty Pleasure: “It’s edgy. It’s an album to rock out to. It’s definitely sexier. I have a sexy side to me, but it’s more of a fun sexy. Sure, I’m a nice girl, but there’s also a part of me that wants to be rebellious.”

On her relationship with beau Jared Murillo from boy band V-Factory: “It’s a normal relationship. He’s a good person, but it took a while. I’m angsty because I’ve been screwed over a lot. But after a while, you realize you can’t carry the baggage. I would hope the ring would be bigger if I were engaged.”