Ashley Tisdale, who is proud of her body, flaunted her slim figure as she posed in her tiny yellow bikini on the cover of the January 2009 issue of Shape magazine. 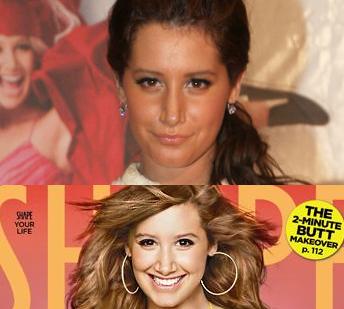 The “High School Musical” hottie opens up to the magazine about her nose job and her secrets for maintaining a slender figure.You could see the preview of her magazine cover here.

On her nose job, she revealed: “I had to recover from the operation in front of the whole world, and a lot of photos were taken of me while my nose was still swollen. Some people made a big deal out of it, saying I had plastic surgery to change the way I look.”

On working out, she said: “The gym felt like torture! Now before I work out I think, ‘I love exercise’ – and it works.”

On always being petite, she continued: “I was always super thin — too skinny, actually. I felt like someone could break me in half.”

On her big motivator, personal trainer Christopher Hebert, she shared: “He’s cute, which makes it fun, and he never lets our exercise session get boring.”

Furthermore, the Disney darling reveals lessons she learned as she added: “My mom never drank or smoked. I learned from her to embrace being different rather than be intimidated by it.”