Ashton Kutcher and Lea Michelle appeared cozy on the red carpet of their “New Year’s Eve” film premiere in Hollywood on Monday night. 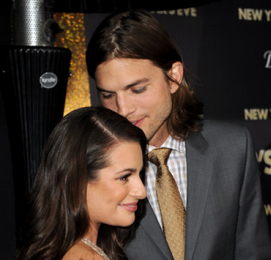 The cute co-stars looked comfortable with each other as they hook up in upcoming film. Lea was overjoyed that she will get a chance to kiss the “Two and a Half Men” star. The “Glee” star looked stunning while wearing a silver Valentino gown. Meanwhile, New Year’s Eve hits theaters December 9.