Hilary Swank, who has graced the cover of “W” magazine, admitted that she relies on a staggering health regime made up of 45 daily supplements as well as a series of vitamin injections. 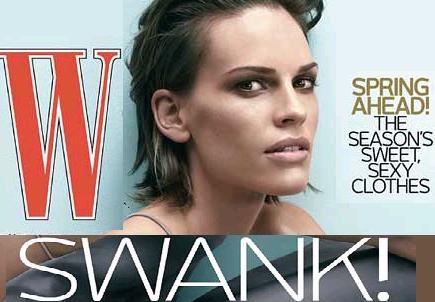 The “Boys Don’t Cry” star also revealed that she exercises daily on top of her tablet intake and said she would rather go to the gym than get an extra hour in bed. You could see the result with bikini photos here as well as here.

In an interview, the 33-year-old actress talked through the array of pills she takes on a daily basis, saying, “This is my Aloe C, which I dissolve in water. Here’s my flax. This one’s for my immune system, and this one is my BrainWave – it’s great, like if I have a lot of lines to memorize.”

She continued, “I just took my most important ones, which are my Oz Garcia Longevity Pak. I shoved them in my mouth right before I met you, which I actually shouldn’t do, because I choked on my vitamins once before.”

She added, “I have a really high metabolism. Exercise is also really important to me. I think it gives me more energy. I would rather sleep six hours and get an hour workout than sleep seven hours. In the past four and a half weeks, I’ve been to London, Texas, Chicago, China, New York, L.A. and New York again. You know, it’s tiring, but I can’t complain, because I’m getting to do what I love.”