Brad Pitt and Jonah Hill landed on the cover of New York magazine’s Fall Preview issue, which will be on newsstands this week. 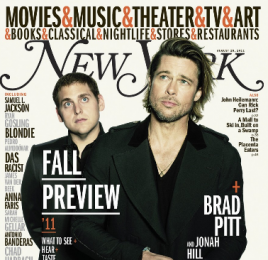 On being obsessed with the “Moneyball” story, the “Babel” actor saw it as a story about justice. It became interesting to him on how a team with a $40 million payroll will compete against a team with a $140 million payroll. On working with Jonah, Brad thought that the co-star is a revelation in this thing like he’s a study in reserve.