Brad Pitt was trying to get into an event for his new movie, “The Curious Case of Benjamin Button” but was stormed by out of control paparazzi. 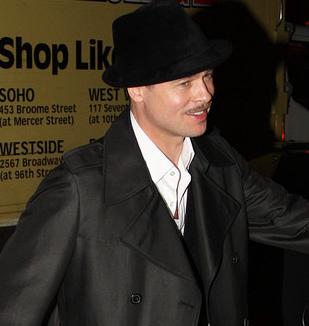 The actor was reportedly grabbed, pushed and spun around by a plainclothes security guard at the premiere of his new film in L.A. on Monday. He arrived at the Bruin Theatre in Westwood about a half hour before the film was scheduled to end, as he was supposed to talk to the audience and answer their questions about the film.

Some photographers knew he’d be there, and as he entered the lobby, they followed him in and attempted to take photos.

Seeing the commotion, an Executive Protection Specialist was attempting to get Brad away from the aggressive photographers.

Now the specialist released a statement, indicating: “We were told by Mr. Pitt’s people that he was being followed by numerous paparazzi that ran a minimum of 20 red lights to keep up with Mr. Pitt. When Mr. Pitt arrived at the theater approximately seven paparazzi bum-rushed the front door of the theater and began to rush inside. It’s security’s sole priority to protect the talent and I removed Mr. Pitt immediately from what could have been a potentially dangerous situation.”

How does Brad Pitt feel about being stormed by out-of-control paparazzi at an event for his new movie? The actor shared his thoughts of the photographers as he revealed: “Though they were exceptionally more aggressive than usual breaking through a security barrier and into a private holding area, ultimately [it was] just another day in the life…”