Brad Pitt and Angelina Jolie had a double date with Clint Eastwood and his wife on Wednesday night (February 20, 2008). 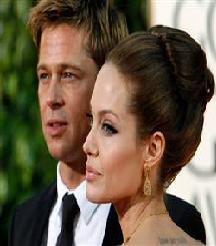 The celebrity couple was the first arrive and mistakenly walked into a nearby eatery before realizing they should be at Los Angeles’ Italian restaurant.

An onlooker revealed, “They were all drinking the wine, but Angelina hardly took a sip. The whole group was extremely animated, clapping their hands and laughing out loud like they were old friends.”

The source said, “Brad was overheard talking about throwing rotten eggs as a kid, and Dina was telling Brad and Angie that they should take their kids to the aquarium.”

The source added, “At one point Angie got up to go to the bathroom, and you could see her pregnant stomach. She wore a loose black dress and had a scarf around her neck, but a bump was visible.”