Britney Spears looked insanely hot in daisy dukes and a yellow see through top as she and boyfriend Jason Trawick made a Starbucks pit stop in West Hollywood, CA, on Friday, June 26. 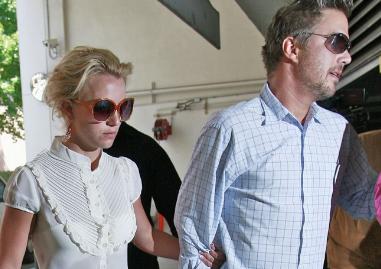 Britney’s polka dot sleeveless top had a cowl neck. She accessorized with white flip flops, oversized sunglasses, matching necklace and drop earrings and multiple bracelets in her left arm. Her platinum blond layered hair was styled in a shaggy look.

Britney was spotted carrying around a pack of smokes. Her cigarettes of choice? Marlboro Menthol Lights!

She was also spotted holding onto the arm of her agent (and rumored boyfriend) Jason Trawick as they head into an office together.

“I was so excited to see his show in London. We were going to be on tour in Europe at the same time and I was going to fly in to see him. He has been an inspiration throughout my entire life and I’m devastated he’s gone!”