Carrie Underwood gets up close and personal in the September issue of Allure magazine as she shares ups and downs in dating, including her past relationships. 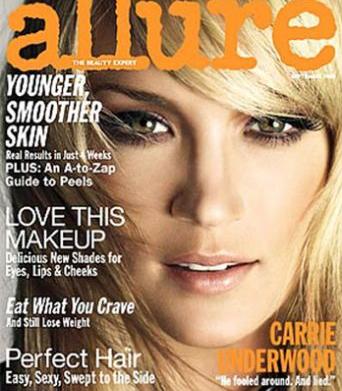 The country music sensation recalls a time when she has just found her success on “American Idol.” A guy who ignored her in college suddenly “wanted to explain.”

The 25-year-old singer revealed: “You never really know why somebody wants to be around you, or if they do genuinely like you. I wish everybody had a label on their forehead so you could automatically tell their intentions.”

Carrie Underwood, who had been inducted into the exclusive Nashville’s Grand Ole Opry earlier this year, admits that she had been cheated on and lied to by someone she refuses to name. She said: “I don’t want to name names, even though he probably deserves it, but he fooled around. Oh, yeah, and lied! It was one of those things that everyone knew but me. He was a good liar. Nobody would come out and tell me. And he seemed perfect in every way.”

But just to set the record straight, it’s not former boyfriend Chace Crawford, who she had broken up with through text messaging.

On the details of splitting with the “Gossip Girl” star, she confessed: “We didn’t have a fight. No one cheated. It plain didn’t work.”

On how being famous makes dating harder, she dished: “You never really know why somebody wants to be around you, or if they do genuinely like you. I wish everyone had a label on their forehead so you could automatically tell their intentions. Sometimes you just wish that no one wanted anything from you.”

And as for her other famous former flame, Dallas Cowboys player Tony Romo, she admits she still hears from him sometimes but she’ll “maybe not answer” the call. She added: “We were both small town people doing very big things, and we relied on each other, dealing with fame.”

The “Some Hearts” hitmaker is on the close-up cover of Allure Magazine’s September issue.