Cat Deeley, who is a television presenter, has shed her girl-next-door-image in a raunchy photo shoot for a men’s magazine, which is bound to raise eyebrows. 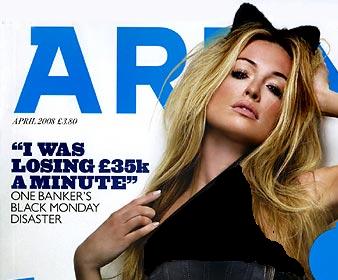 The new shoot, which features in the US version of men’s magazine Arena, looks set to win the British native a legion of new fans, which you could see here and here.

The British television presenter revealed, “With everything I had going on – emotionally in terms of breaking up with someone, in terms of relocating – it is almost as if I didn’t give it too much thought. In fact, I didn’t really understand the enormity of it all until the day after the premiere of my first show. I never want to get comfortable; I always want to try new things. What I try to do is a job, which is a very commercial, entertainment show, and then I might go and interview Kylie Minogue after she beat cancer.”

She continued, “Then I might do something for children, and then I’ll host the Brit Awards. I don’t want to be put in a box. It would kill me to do the same thing every year. I am a single woman, and desperate for a man! I haven’t found one yet, but there are plenty to choose from, which is good. It’s a much bigger country than the UK, so slowly but surely I will work my way through them all.”

She added, “I absolutely love it. I sunbathe. I have a house and a pool. I walk outside and can’t believe I’m here. I kick back and drink margaritas. I’m really enjoying it. It’s a nice place to be. You wake up, the sun is shining, you drive around, and you get anything you want at whatever time you want it. It’s great.”