Charlie Sheen posted the picture of his reunited girlfriend Bree Olson and other goddess while wearing t-shirts with his catchphrases. 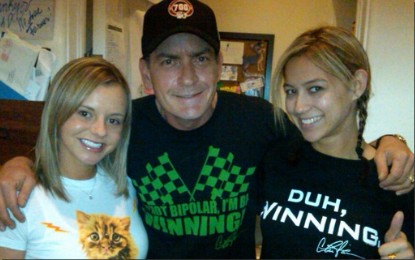 The actor’s catchphrases included “I Have Tiger’s Blood In Me,” “I’m Not Bipolar, I’m Bi-Winning!” and “Duh, Winning.” He also started an online store, where his fans could buy these shirts and other things.

Charlie has another show on the road which is “My Violent Torpedo of Truth/Defeat is Not an Option Show.” His first live performance will be at the Fox Theatre in Detroit on April 2.