Chris Brown was the big winner at the American Music Awards on Sunday night, surprising himself most of all. 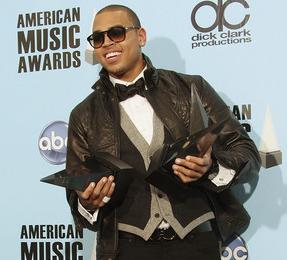 The American R&B and pop singer-songwriter, who won artist of the year, male pop/rock artist and male soul/R&B artist, declared: “I don’t know what to say. I would have given it to Coldplay.”

Kanye West, still sore at losing male rap/hip-hop artist last year, won the trophy this time – then said Lil Wayne deserved it more, saying: “I want to give this award to Wayne. If it was last year it would have been my award.”

It was West’s second trophy of the night, following his win for rap/hip-hop album, for Graduation as he added: “It’s our responsibility as musicians to push music to the point it was in the ’60s and ’70s. I want to be Elvis.”

Host Jimmy Kimmel, who had made West’s ego a running joke, quipped: “Elvis died on the toilet with half a jelly doughnut in his mouth. You may want to rethink that.”

Alicia Keys, who captured two awards for her As I Am album, winning for both the pop/rock and soul/R&B categories, let out a loud “Woooooooo” after picking up a trophy, then dedicated her victory “to all the super women who struggle every day to make it through.”

The show climaxed with Keys performing “Superwoman” with Queen Latifah and opera star Kathleen Battle, and ending with a large photo projected on a screen of incoming first lady Michelle Obama.

Rascal Flatts picked up their fourth American Music Award – and third in the last three years – for country band, and Brad Paisley won for male country artist, getting a laugh from the audience as he turned over the pyramid-shaped trophy and said, “Made in China?”

And Justin Timberlake made a surprise appearance to introduce award of merit recipient Annie Lennox.