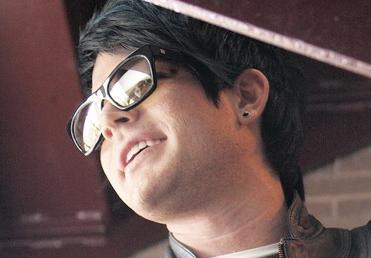 Here are excerpts from the article:

The 27-year-old dude who made guyliner fashionable again gave an interview to the magazine confirming—big surprise—that he’s gay. What’s really surprising: I can’t stop thinking about him. And neither can any of my cougar-aged friends. We love Adam, truly, madly, deeply, in a kind of weirdly Mrs. Robinson sexual way. And the reason doesn’t just have to do with our past lives as professional groupies. It also has something to do with biology.

“In terms of biology, Adam Lambert’s attractiveness is kind of bizarre. Some research shows that women like square jaws and deep brows—iconic masculine traits—when they’re looking for a fling. But we like more feminine traits when we’re looking for The One, the long-term mate. Lambert has a little bit of both going on for him, as anyone who saw his version of Led Zeppelin’s ‘Whole Lotta Love’ can attest.

Part of the Lambert allure is that some women find his onstage lack of inhibition a powerful aphrodisiac. According to psychoanalyst Dr. Gail Saltz, we all have a little touch of the voyeur inside of us, but it’s often repressed. Then along comes Lambert, and those voyeuristic floodgates open. “Here’s a guy who is a maximum exhibitionist, molten hot, can sing anything and is screaming, ‘Look at me,’ and for some women, that’s an incredible turn-on,” says Saltz, author of The Ripple Effect: How Better Sex Can Lead to a Better Life.

“It may also go back to our childhood, as all things psychoanalytic seem to do. According to [psychoanalyst Dr. Gail Saltz], buried deep inside all of us is the childhood desire to be able to have everything and anything, whenever you want. So part of our fascination with Mr. Lambert is that we may want to be like him. ‘[Lambert] is the poster child for having it all,’ says Saltz. ‘Men want him, women want him, and that ambiguity is as hot as hell.’”