Most stars would be happy to be compared to Angelina Jolie. Megan Fox isn’t one of them. 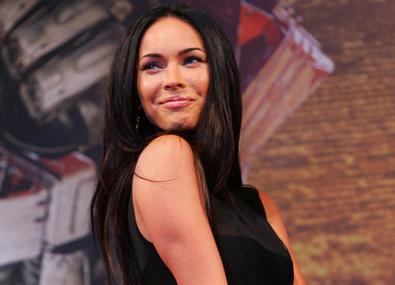 “It’s a lack of creativity on the media’s part,” the Transformers star says in the latest issue of Entertainment Weekly (on newsstands June 12). “Because I have tattoos and dark hair and I was in an action movie? That’s as far as the similarities extend.”

The 23-year-old actress — who says she was joking when she once said she was afraid of the Changeling star — admits that she has no plans to get to know Jolie.

“She always seems otherworldly in her power and her confidence,” Fox says. “I’m sure she has no idea who I am. But if I were her, I’d be like, ‘Who the f— is this little bulls— brat who was in Transformers that’s going to be the next me?’ I don’t want to meet her. I’d be embarrassed.”

Fox even interjects when asked if she wanted to follow in Jolie’s footsteps of starting out as a sex symbol before taking on serious roles.

“Angelina Jolie was always a Method actress,” she says. “She’d been nominated for Golden Globes before she ever did Tomb Raider.”

Still, the star — who admits “I’m clearly not ugly” — isn’t bothered by the fact that she’s seen as a sex symbol.

“I don’t know why someone would complain about that,” she says. “That just means that the bar has been set pretty low. People don’t expect me to do anything that’s worth watching. So I can only be an overachiever. I think all women in Hollywood are known as sex symbols. That’s what our purpose is in this business. You’re merchandised, you’re a product. You’re sold and it’s based on sex. But that’s okay. I think women should be empowered by that, not degraded.”

In fact, she doesn’t regret how Transformers made her “this new girl” in the industry.

“I happened to be such an outrageous personality that people wanted to start writing about me because it was deemed controversial,” she says. “I think if I had been a typical Hollywood actress and I said all the right things and I had been a publicity android, it wouldn’t have escalated to this level.”

Fox, who appears in this summer’s blockbuster Transformers: Revenge of the Fallen, doesn’t want to still be making robot movies five years from now, but when asked what the worst-case scenario would be, she says, “That I’d be on The Hills.”