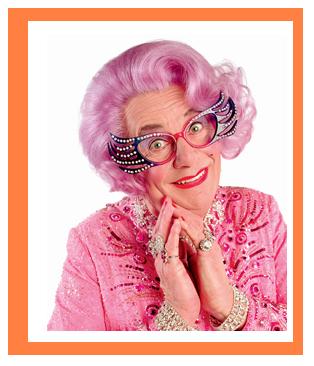 Barry Humphries has written several books and hosted various television shows as Dame Edna (on which Humphries has also appeared as himself). In 1979, Dame Edna was the subject of a BBC Arena mockumentary: La Dame aux Gladiolas. Dame Edna has frequently said that the thought of a man dressing up as a woman for entertainment purposes is repulsive.

It is unfortunate thing that Barry Humphries to previously canceled a tour as his alter ego Dame Edna Everage due to an emergency appendectomy and ensuing complications. Nearly a year after, Barry is ready again to wear his lilac wig, sequined spectacles, and glittery frocks that are trademarks of the housewife turned gigastar.

Following short runs in Austin and Vancouver, Dame Edna Live and Intimate in Her First Last Tour begins a six-week run Nov. 20 at the Post Street Theatre. That’s the theater, then named Theatre on the Square, where Humphrey, a celebrity in his native Australia and in the UK, first found success on an American stage a decade ago.

Barry Humphries first performed in the US as Dame Edna in a 1977 off-Broadway show titled Housewife! Superstar!! Dismissed as “abysmal” by The New York Times, it quickly closed — though the show described in the review doesn’t sound far afield from what years later would earn Humphries a Tony Award. Even down to the gladiolas.

Dame Edna seemed to be ahead of her time, and while the appendectomy did sideline the old dame, the 74-year-old Humphries sounds eager to get back into the SuppHose. Barry Humphries as Dame Edna revealed: “My shows are not really shows at all. They are miracles.”

Here is the schedule of Dame Edna’s 2008 tour dates: